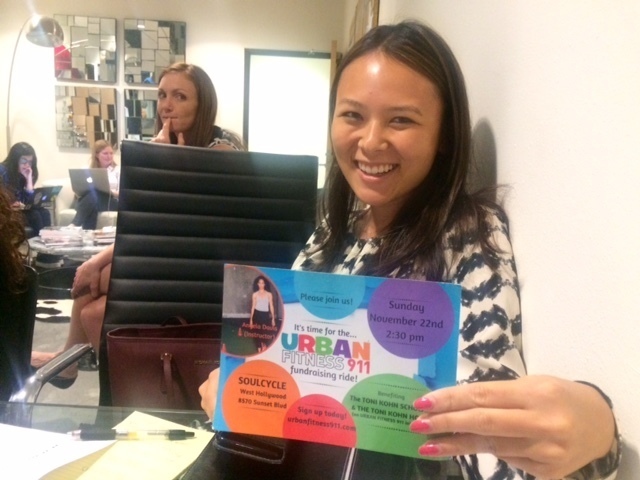 Urban Fitness 911 is an inspirational  program that brings celebrity fitness experts, dieticians, tutors, and exposure to underserved students in Los Angeles. Growthink is honored to work with such a wonderful team making a real impact on the local community!

I had the privilege of seeing Chuck and Josef present at Oasis Summit earlier this spring. They certainly had some exciting news just around the corner... Congrats to this great Los Angeles company and inspiring team!

A South Bay tech company has raised $60 million in its first round of external funding from Technology Crossover Ventures, a late-stage venture capital firm that has backed such heavy hitters as Facebook, Netflix and Spotify.

Swagbucks.com, whose parent company Prodege LLC is headquartered in El Segundo, offers gift cards to Wal-Mart, Nordstrom, Amazon.com and about 300 other e-commerce companies in exchange for interacting on its site. Users earn points — or “swag bucks” — when they shop, search the Web, play games or take quizzes. The company then uses the data collected to run targeted ads and drive traffic to its affiliates.

“Rewards are not just an aside, they become an emotional part of the experience,” Swagbucks President Josef Gorowitz said by phone Monday. “The consumer is constantly collecting points and having fun doing so as well.”

Swagbucks, which bills itself as the “leading rewards discovery community” and top provider of free gift cards, announced its new funding today in a press release.

The announcement of Swagbucks’ venture funding comes amid what seems to be a boon in the online rewards and coupon sector. RetailMeNot Inc. had its initial public offering in 2013. Pre-IPO shares of Coupons.com Inc. jumped 90 percent after it went public in March. And Ebates Shopping.com Inc. is reportedly planning its IPO for later this year.

However, the real value of these rewards sites, which purportedly create value by driving traffic to affiliate partners, may be overblown.

“One of the biggest problems in e-commerce is attribution,” said Brooke Partelow, co-founder of Bounce Exchange, a conversion rate optimization company that tracks website-user engagement. “They may be taking credit and getting paid a commission for a sale that the site was going to have anyway.”

Reward platform sites like Swagbucks say they drive new customers to vendor sites, but those customers may have planned to buy from those vendors regardless. A person might search for a Hugo Boss suit on Google, find the one they want at Nordstrom.com, and then search for a coupon code.

“Vendors have a very hard time determining who gets credit for helping them sell more,” Partelow said.

Swagbucks’ $60 million deal is a coup for the tech scene in Southern California, where large scale venture capital is harder to come by than in Silicon Valley.

There’s been a lot of investment in Silicon Beach companies in West L.A. recently, but the funding tends to hover between $500,000 and $2 million, according to Matt Crowley, president of the Los Angeles Venture Association.

“When you reach out to VCs, you run into a really hard ceiling,” Crowley said. “Anytime someone raises that much money, it’s darn impressive.”

Venture capital firms invested $9.5 billion in the United States during the first quarter of 2014, according to the PricewaterhouseCoopers Money Tree Survey. About half of that was spent in Silicon Valley. Only 5.5 percent, or $520 million, was spent in the Los Angeles-Orange County area.

According to an interactive map on socaltech.com, a news site that keeps tabs on the industry, there are about 650 technology companies in Silicon Beach, the area stretches along the coast from Santa Monica south to Playa del Rey and east to Playa Vista. There are about 300 tech-related firms in the South Bay, according to the map.

Join my network on LinkedIn: http://www.linkedin.com/in/melissaawelch

Congratulations Luke - what an exciting opportunity for you and the great entrepreneurs attending!

Announcing Our First Batch of V2V Mentors: Register Now to Meet Them in July

After such a successful SXSW V2V Mentor Program in 2013, we are thrilled to announce our first batch of confirmed Mentors for the 2014 event. This is really an impressive crew of thought leaders from a variety of industries across the country. No matter where you are in the process of pursuing your dreams, we have a mentor that has trod the path before you and will help you tackle the next steps. Our extensive Mentor Program is the cornerstone of SXSW V2V, designed to provide you with the support, advice and expertise to take your idea to the next level.

We congratulate and welcome our newest Mentors to SXSW V2V:

Look out for more SXSW V2V Mentor listings to come, and keep your eye on the V2V website for more information on how to reserve your time with one of these 100+ all-stars!

V2V badgeholders have the exclusive opportunity to meet with these stellar Mentors, so if you have yet to register for the event, do so today before the price increases on Saturday, April 26.

Have any interesting people to suggest for the SXSW V2V Mentor Program? Please don't hesitate to contact us at any time.

Growthink Team and Fans of Growthink,

Please help our very own, Luke Brown, get selected to speak at SXSW in Vegas this July!
http://panelpicker.sxsw.com/vote/28854
Votes need to be cast today, but takes just a few minutes to do.
This a GREAT and growing 3 day conference that was born from the success of SXSW in Austin and would be phenomenal opportunity for Growthink to engage with great entrepreneurs that could use our help!
Thank you for your support!
Melissa Investments by angel groups last year grew with increases seen in investments in startups in the Internet, health and mobile sectors, according to a new report.

The findings came in the Halo Report, which measures only the activities of angel groups and doesn't include the seed investment activities of venture firms, accelerators or angels who act independently. The report is issued quarterly and annually by the Angel Resource Institute, Silicon Valley Bank and CB Insights.

The three most active angel groups in the country last year were the Golden Seeds, Tech Coast Angels in Southern California, the Houston Angel Network and Silicon Valley-based Sand Hill Angels, according to the Halo Report.

California had the largest share of deals involving angel groups (19%) and the greatest amount of investment (20%). The report also showed that about three-quarters of angel group investments are done in their home state.

Five regions of the country accounted for about two-thirds of the deals and dollars invested: They are California, New England, Great Lakes, Mid-Atlantic and the Southeast.

Median angel group round sizes have remained steady over the past three years at $600,000.  But when angel groups co-invested with other types of investors, the median round size reached a three-year high of $1.7 million.

The amount invested in healthcare startups by angel groups rose from $1.1 billion in 2012 to $1.5 billion last year. In the Internet sector it rose from $935 million to $1 billion. In mobile/telecom it went to $1.1 billion from $1 billion.

"We brought our nascent business idea to Growthink. Anna Vitale was our point person. Growthink not only helped us organize and articulate the ideas we already had, they burrowed into our concept heart and soul, were a font of research and ideas, and helped us expand our idea into a more exciting and dynamic plan than we'd originally imagined. Anna is smart, organized, hard working and something you rarely find in any profession: a perfectionist. By the time Growthink's work was complete, Anna had spent untold hours revising, refining, and honing our business plan into a document we can present with confidence and pride.  I highly recommend Growthink and Anna."

Back in November when we stepped into the Growthink office for the first time, we were four industry people who had a vision for a new company but no real blueprint to share with the business world.

On behalf of Chris, Rick and Tom, “Thank you, for your time, effort, consideration and attention to detail as we got started, seeing us through the holidays and making sure our final product reflects not only who we are but the work Growthink is committed to putting out in the world.”

While it took a bit longer and a few more hours and people than we all expected, we are happy with our final version and will be taking it out into meetings in the coming weeks.

Please pass our comments along to your colleagues and remind them on our behalf of your professionalism and your commitment to exceeding our expectations of excellent customer service.